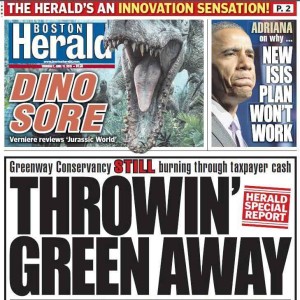 It’s time for the president to stop playing footsie with ISIS.

When it comes to winning the war with this global threat to humanity, he needs to go big or go home while he still can.

President Obama should either withdraw all U.S. military from Iraq and Syria and announce this is their problem or he should do whatever is necessary militarily to eviscerate ISIS.

His halfhearted attempts of degrading and destroying the extremist militants, at arm’s length, is failing — miserably. The Islamic State’s recent takeover of the key city of Ramadi is reinforcement of that unsettling reality.

Yet despite the Islamic State’s continued expansion — Libya and Yemen included — our commander in chief continues to take the path of least resistance. This should come as no surprise given that he campaigned on promises to end two wars, not engage in another one. But life doesn’t always play out the way we want it to.

Now in a reluctant effort to bolster our country’s losing campaign against ISIS, the president has announced he’ll be sending an additional 450 U.S. troops to Iraq, bringing the total number of U.S. military stationed there to approximately 3,400.

We’re told the 450 new troops will serve as “advisers” and “trainers” to the Iraqi military, yet many experts said they believe this is a futile exercise given that the president admitted this week he still doesn’t have a coherent strategy to destroy ISIS.

That’s embarrassing given that last summer when the U.S. airstrikes began, the president admitted he didn’t have a military strategy then either.

Is this leadership? Or the beginning of America’s great demise?

Clearly, Obama’s heart isn’t in this war. His actions confirmed that as he pranced off to play golf right after announcing James Foley’s beheading at a press conference last year. A real leader would’ve headed straight to the Situation Room — not the country club.

Obama prefers to talk about climate change, insisting global warming is our greatest threat. Funny, I don’t recall a nor’easter or drought ever raping women, cutting peoples’ heads off or throwing gays off rooftops.

ISIS must love the notion of climate change.

Adriana Cohen is co-host of “Boston Herald Drive” on Herald Radio weekdays from 7 a.m. to 9 a.m. Follow her on Twitter  @AdrianaCohen16.