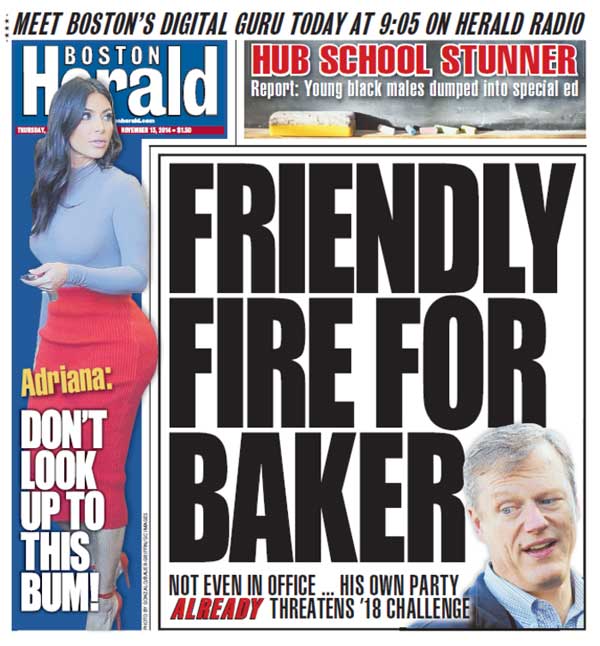 As an added bonus, another priceless nude shot has Kim showing off her most prized asset — her bountiful oil-slicked bum.

Now, as a red-blooded American capitalist, a part of me has always applauded Kim’s seemingly unflinching attention to the, ahem, bottom line. After all, the woman who launched her career with a sex tape has zero real talent, and her only currency is her many curves.

I also understand that anyone named Kardashian is basically a pop culture joke. Kim and her kin exist so the rest of us can laugh and feel superior. And perhaps it’s only reasonable that after being the longtime butt of a national joke, the next logical step for Kim is to cash in big on her bare butt.

But sadly for pop culture, Kim remains one of the most famous and highly paid female celebrities in the world. Which makes her a role model, of a deranged sort, for millions of young, impressionable girls who dream of short cuts to fame and fortune.

Clearly, the feminists have failed. Yes, I know they can point to glass ceiling-breaking successes, from Hillary Clinton to Nancy Pelosi to Sheryl Sandberg. But their dreams of self-actualization have also spawned Kim and her reality-star kissing cousins, Kendra of “Kendra on Top,” “Tamar and Vince” and “Real Housewives of” you name the city.

Collectively, we encourage our daughters to strive for an education and to find a career that’s meaningful for them. Lean in, become a scientist and cure a disease, we tell them, or be a human rights activist, an educator, a writer, a doctor, a CEO, an astronaut, an architect. Try to make the world a better place.

But then we all stop to rubberneck at the never-ending train wreck that is Kim Kardashian, balancing a champagne glass on her bum, and it’s hard not to feel a billion Chinese laughing at us all the way to their banks.

Of course, behind all these vulgar circus freaks lies Hollywood, both a city and a state of mind where dream merchants pretend to care about equality for women, but never think twice about sexually exploiting them for financial gain.

I guess, as mothers, that leaves us no choice but to double down on our daughters, join in on their Kardashian jokes but make sure they never let the joke be on them.

Adriana Cohen is a columnist and talk show host for Boston Herald Radio. Go to adrianacohen.com or follow her on Twitter @AdrianaCohen16.