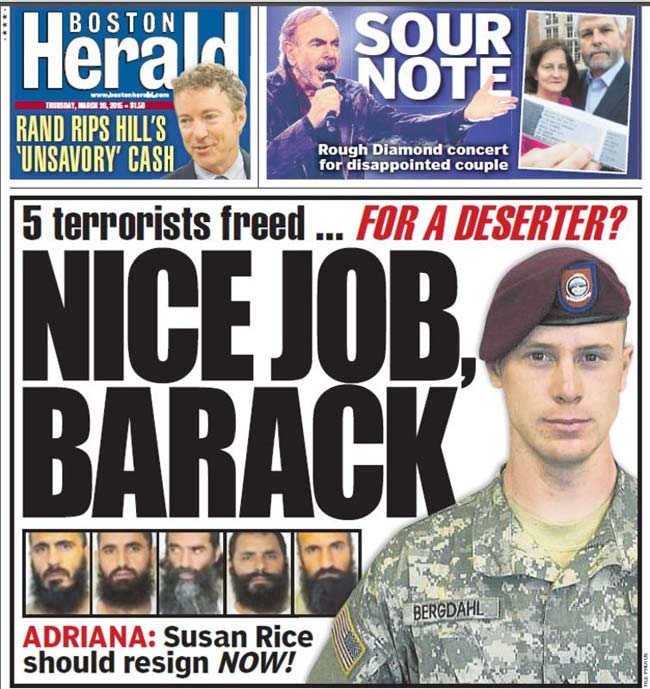 After the highly controversial prisoner swap in May of five hard-core Taliban commanders from Guantanamo for Sgt. Bowe Bergdahl, Rice went on ABC’s “This Week” and said Bergdahl “served the United States with honor and distinction.”

That was despite platoon mates accusing Bergdahl of abandoning his post.

Now after a lengthy investigation, Army officials have charged Bergdahl with one count each of desertion and misbehavior with the enemy — charges that could land him in the stockade for life.

Which raises the question: How does Susan Rice even have a job? Clearly, she can’t be trusted with the one she has now.

Let’s not forget the repeated tales she told after our consulate was attacked in Benghazi in 2012. Rice went on the Sunday news show circuit immediately afterward and insisted the assault was carried out by random protestors over an offensive anti-Muslim video. That was soon proven false.

We know the attack was committed by radical terrorists in Libya. And now that jihadi snake pit has fallen into complete chaos.

But instead of firing Rice, President Obama promoted her. She has jumped from U.N. ambassador to national security advisor. And what is the thanks we get for paying her salary? She botches the Bergdahl swap.

The U.S. has a long-standing policy of not negotiating with terrorists. Why encourage our enemies to grab more American hostages?

Then there’s the high recidivism rate of prisoners rejoining the battlefield once released.

CNN has reported that one of the five terrorists swapped for Bergdahl tried to rejoin the jihad. Fox News reported yesterday that three have already made attempts to rejoin the fight.

It’s simply wrong to ask our brave men and women in uniform to fight the same enemy twice.

But Obama has made it clear he wants to shut Gitmo to honor a misguided campaign promise. And obviously he’s willing to put our security at risk by releasing dangerous terrorist prisoners bent on killing us.

He’s also willing to retain high-ranking members of his administration, including Rice, even when they fail the American public.

Both are a disgrace.

Adriana Cohen is co-host of “Boston Herald Drive” on Herald Radio and WMEX AM 1510 weekdays from 7 to 9 a.m. Follow Adriana on Twitter @AdrianaCohen16.