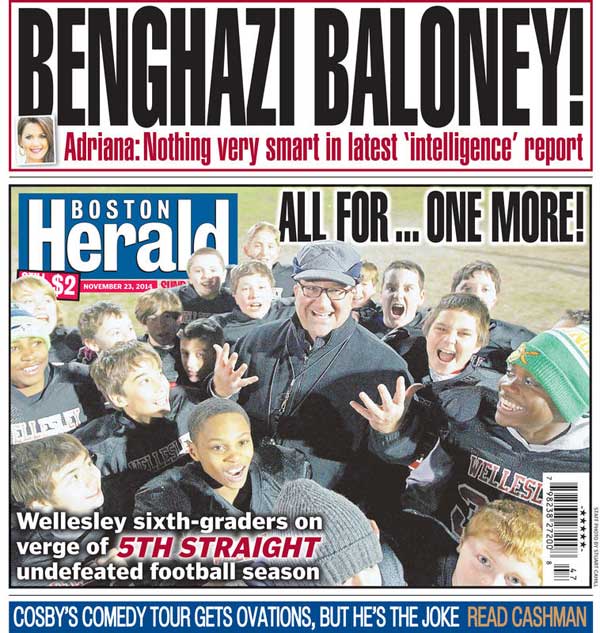 In a head-scratching attempt to muddy the truth, the Republican-led House Intelligence Committee has released an investigative report absolving Washington — the Obama administration, the State Department and the CIA — of any wrongdoing in their response to the deadly 2012 terrorist attack on the U.S. consulate in Benghazi. The stunning new report claims that no one told the CIA security contractors stationed in the nearby annex to “stand down.” This is in stark contrast to statements made by three CIA security contractors who have said in interviews and their best-selling book they were told to stand down or wait three times — orders that delayed them and cost Sean Smith and Ambassador Chris Stevens their lives on Sept. 11, 2012. “The House Intelligence Committee report claiming there was no standdown order is incomprehensible,” said one of those CIA contractors, former Army Ranger Kris Paronto, in a statement to the Herald. “Especially when I looked Rep. Mike Rogers right in the eye when he asked me during questioning if a standdown order was given. I said ‘yes,’ and told him that had we not been delayed, we would have been able to save Ambassador Stevens’ and Sean Smith’s lives.” The report also says that there were no intelligence failures related to the attack that killed four Americans — an assertion that defies both fact and reason. Ambassador Stevens, citing growing terrorist concerns, requested additional security several times months before the attack, which was ignored by Hillary Clinton and the State Department she was responsible for overseeing. Which begs the question: What good is it to provide intelligence if it’s ignored? And, in the months leading up to Benghazi, the Red Cross and the British had been attacked by terrorists, prompting both to shut down their facilities in Benghazi and send their personnel home. That provided both the State Department and the White House with ample “intelligence” that the U.S. consulate in Benghazi was unsafe, surrounded by dangerous terrorists, and required additional security for U.S. personnel stationed there. The report claims there were no intelligence failures but also says that Susan Rice was given conflicting information from intelligence analysts in the aftermath of the attack. Well which is it? The report can’t say there wasn’t an intelligence failure and then let Susan Rice use intelligence “failures” as an excuse for lying to the American people on the Sunday talk shows. What America knows is that during the 13-hour terrorist attack, Hillary Clinton, President Obama and high-ranking members of our government didn’t answer that 3 a.m. call. They did not dispatch military backup to protect Ambassador Stevens, American personnel stationed in Benghazi or the six American security contractors who risked their lives to save the lives of at least 20 others that night. They were all hung out to dry. After six years of the Obama administration’s incompetence and scandals, our faith in getting the truth lies not with the government, but with our brave military and private citizens. Congressman Trey Gowdy’s Select Committee on Benghazi investigation is still underway. Let’s hope he’s able to shed light on what happened once and for all. The victims and their families deserve both justice and the truth. Adriana Cohen is a columnist for the Boston Herald and a co-host of “Trending Now.” Visit adrianacohen.com and follow her on Twitter @AdrianaCohen16.